BOM: get the Best of Mosaic Art NOW

Keep up with what’s happening in the world of  contemporary mosaics on your own time by subscribing to The BOM.

The BOM is a weekly digest showcasing three MAN articles and the top five tweets of the week. Sign up below and  The BOM will show up in your email inbox every Sunday at noon Pacific Standard Time.

We hate spam, too, so we won’t share your information with anyone else and guarantee that The BOM will be the only time you’ll hear from us – unless, of course, something really great comes up.

This Article appears in:

Geology
36 h x 32 w 25 d centimeters. Yellow travertine, cement.
Photographer: Elad H. Friedman
The stunning mosaic sculpture above, “Geology” by Nirit Keren, was one of the 18 mosaics selected for MAN’s 2010 Exhibition in Print. It is typical of Ms. Keren’s work which always speaks with raw authenticity and begs to be investigated further. Here is what Keren wrote regarding “Geology”:

My work is inspired by geological forms. This sculpture describes a cross section of the earth’s layers leading down into the core. Using one material in subtle ways allows me to recreate the minute changes in texture that indicate the differences between each layer. The overall shape of the work is an upward, thrusting motion — energy coming from the earth’s core up and out. This shape also feels decided spiritual to me for I see within it an abstract angel rising towards the heavens.

Keren is an artist who consistently makes a brilliant connection between the materials she is using and what her soul has to say.

The native Israeli recently completed a work, “The Precious Stamp”, that we found achingly beautiful as we watched the excellent video by Iris Refaeli below that chronicles its making. We immediately contacted the artist to find out more about what was behind “The Precious Stamp” which now hangs in the “Personal Readings of Ancient Mosaics” exhibit in Jerusalem. As we expected, it was quite a lot.

Naomi Weinstein, the curator had called the artists to relate to one or two ancient mosaics found in Israel, and to give it a personal interpretation. Since I was in the middle of a process with myself as an artist, I already understood that what attracted me to mosaics in the first place was very unconscious, and it had to do with the way I handle grief . “Sometimes I need to break things in order to compose something new” those where my words not so long ago….

What follows is the “brief” which hangs next to The Precious Stamp in the exhibit.

When Neomi Weinstein, the curator, came up with the idea for this exhibition, the first thought that came into my mind was the zodiac wheel of Beit-Alfa.

When I continued my research on the project, it became clear to me that it has to do with the story of my life. When I was 4 years old, I lost my father in the ’67 war. At that age I was not able to understand the loss and I never did grieve over him. Only through art, at the age of 46, I started to deal with his death.

Helios, the God of the Sun, is a patriarchal God in the Greek Mythology. He is the main figure that appears at the centre of Beit-Alfa zodiac. His job is to watch everyone down on earth. I chose to replace Helios with a portrait of my father, taken from an old picture in black and white.

The portrait is made in the method of reverse mosaic in order to give it a flat look, as it is just a remote memory, a photograph. I added my Gemini birth sign, together with some decorative reference from the original mosaic. The portrait is surrounded by the moon and stars, as it is in heaven, and the background is laid in an outward motion from the head to give it an iconic feeling. I left part of the lime bed (background) exposed because I have always been interested in the glues and bonding material that where used in ancient times. The formula for the lime bed was given to me by Mr. Galeb Abudiab, from the Israel Antique Authority, and it represents a link between the past and the present.

As I was looking for the right picture of my father, I found an old stamp-book that belonged to my father as a child. I randomly opened the book, and right in front of me on the page was a big, square, stamp of the Beit-Alfa zodic mosaic and on the top of the page, in a childish handwriting he wrote “The precious stamp” in green ink. This is when all joined together to become one project – “The precious stamp” mosaic. 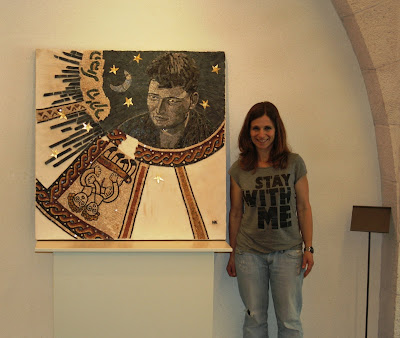 The “Personal Readings of Ancient Mosaics” exhibit runs now through December 12th at the Jerusalem Center for Near Eastern Studies at Brigham Young University, Jerusalem. Here is a link to the University’s website. http://ce.byu.edu/jc/

Other Areas of Interest